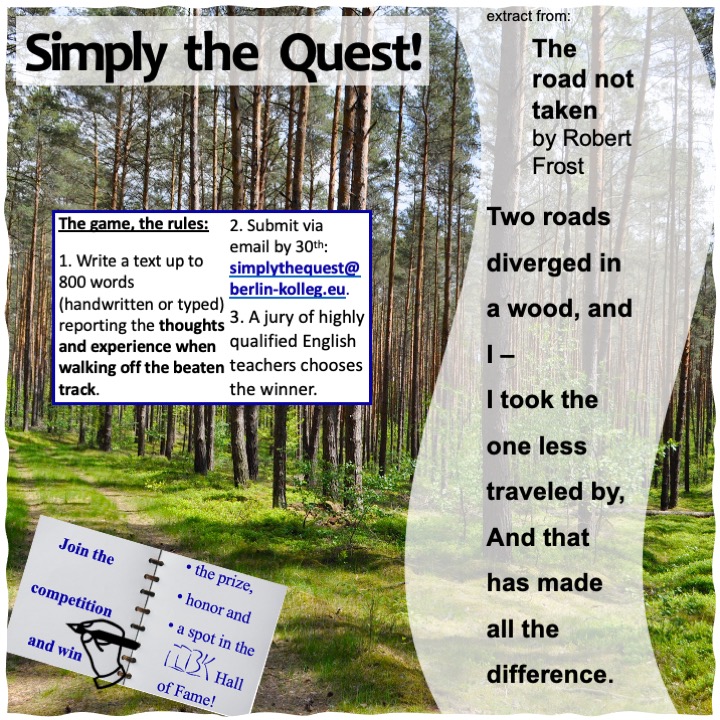 I had a great time at Aalin’s house with her and Amelia. They had offered to walk me back. “No need,“ I had said ”Besides I have those detailed instructions from my parents, just in case I take the wrong path and a farmer robs me of the leftover cake!” They laughed.
As I walked along the winding path through the woods, I began to think of the preparations I would have to make for Aalin’s party and what reason I’d give my parents for being back so late. I mainly thought about Adam though. The first time we had kissed, how we used to sit by the river chatting and watching the world go by, but also the messy break up that ensued. I was awoken from my daydreaming by the chirping of a big white owl in the tree above. I looked at the tree ahead of me. I had been walking through these woods since I was a little girl and could virtually remember every single tree, but I couldn’t remember a beech tree like this. Using my torch, I looked in my bag for the instructions my parents gave me so as to get home. I looked twice. I emptied out my bag, but no it wasn’t there. I must have left it at Aalin’s house. I couldn’t remember the way back though, for I hadn’t been paying attention. How would I ever find my way back to Aalin’s house to retrieve the instructions? I decided to keep going. Though the path was not an official one, it looked as though other people had walked along it. “If I keep going I will find my house eventually, surely?” I thought to myself.
Three quarters of an hour later I was still no closer to finding my way home. The path was endless. I jumped at every creak of a tree, at every small animal rustling in a pile of leaves. To the right, ahead of me, I could make out a faint glow. I followed the glow, thinking it must be coming from my house. However when I reached the house, I realised it was a house that belonged to the farmers. Behind the house was a field with dying crops, the moonlight beating down on them and a thin veil of mist floating eerily above. I quickly headed back the way I came from. I heard something. Someone is following me, I realised. I ran as fast as I could, but then I heard a voice behind me. “It’s ok, I’m not going to hurt you! You lost?” I looked behind me. There was a woman. Through the darkness I could make out her scruffy brown clothing. Her face was extremely thin. “Come on,“ she said, “why don’t you come back to my place? We’ll sort things out.” I paused for thought. I knew my parents would be horrified at the prospect, but then again, they wouldn’t be happy at the prospect of me stumbling around in the dark all night either. I followed her.
As I entered the barely furnished scruffy house, I could hear a baby crying. The women went over to the crib and pulled out the crying baby. I looked horrified at the thin little thing. Almost as thin as the mother. “Don’t mind him.” said the mother, “he’s only hungry, what with all the crop failures this year.” After calming the little one down, the mother put the child back in the crib. “What is your name?” she asked. „Mona,” I said, “Sorry to bother you. I got lost and can’t find my way back.” “That’s no problem. I’ve seen you around. I know the housing estate you are from. It’s Jenny by the way.” Jenny put a dish on the table and poured some orange coloured soup into it. “Now eat,” she said. “I can’t,” I said. “Eat” Jenny retorted. Not wanting to seem ungrateful, but feeling guilty at the same time, I started eating the soup. However as I was eating the soup, the baby started crying again, screaming even. I started shaking. I couldn’t bear it any longer, so I guzzled the soup down and then asked Jenny to show me the way back.
Jenny took me along a path. Ahead of me I could see the river. “You see those lights over there? They are the lights of Glion Bridge. You just follow them and then cross the bridge, walk for five minutes and you are home”. I thanked Jenny and continued walking, the baby still screaming inside my head. My eyes welled up with tears. Through my tears the lights ahead had become massive smudges. Then the tears stopped abruptly, for I knew I would one day return.

We had to go far out, off the trite trails, over yonder, down across abysmal vales, bushes and fern, to escape the foul human stink of their cocky customs and break through the thicket, ascending on withered, wrecked bridges to renew, distal recollect the smell of the scent of the lilac smile of our nature.
Eavesdrop their chuckling, oh (‚delightful‘) dear, but the rushing frenzy of constant rapture, undertow of entotic murmur impedes my sense for tantalising heights.
Dreams of seaming saplings stand as pillars.
Taste the delicate cream now when what whipped, stirred by tearing whine, ensnared by horrid wail of sirens, deafening, grunting and squeaking by in mud wallowing hogs and piglets, raging spitting sucking the flock.
To the bottom it pulls me, the ostentation from bumfuck nowhere of deluded appearance of being, fucking shit, that’s a pain in the ass.
Halt! Steady on is the matter. Dynamic decay. Together, is (that), the living. The dance of incidence.
Stop!
Can you see (it,) the creek(-s) flowing, can you feel the wind blowing (in your face), can you smell the flowers blooming, hear the birds singing and the sun tasting from earths wells. Isn’t it beautiful? Isn’t it abiding enough? We always want more.
With volatile flying satisfaction, cut furrows.
Smoking pipe.
I look around and hear the bees humming and buzzing.
There aren’t many left, of us. Many are forsaken, from them, who rely on, have abandoned the self.(; us;) Vacating vacation is, what they got. But from whom? From (in-)different. Who are lost on them. Alack, doleful woe! Travail, in the storm, convolvulus wreath, twist oneself free from the whiff to go astray in alleys. To suffer want to sluggishly expose oneself from the comb.
Vanishing iridescent golden glow –
Crimson crepuscle veil –
Purple robes mantle –
Good ol’ days gone with the river flow(-er of life).
My house stands lonely and still by the stream.
The walls are straight but crumbling, the roof floating –
Well on the mountain top washes insight.
And the tree fell from the leafs –
But I never reached the earth.
Watch me fall forever –
You are hearing me reaching for your ears as I am too distant from the self to make out my own way of words –
I lost my path –
Says the mother(’s) of(-fer) them off sprung of the earth –
Unto me comet a, cameth it, collided two separates, in let(t/ h)ers swift –
Spoke, there, at the root of a tree at the highest mountain of the chain dwelleth it, thou might meet, this being –
When diving deep under the surface of the lake, to the ground, where there is not sound nor light
A savage’s lisping list mustn’t be fallen for.
Go with it.
You’ll find out –
When placed in the center placid, then let us see the ways, come, belong, long gone, fixed, and as the climbing, as well to rivers run streams, shall they spring, they shall, upwards –
I will show you direction, lest thou not (be) forgetting(/forgot), oblivion hadn’t been bend who am I that are who is you, behold.
From the seed a palm springs fourth.
Follow these, for they stem from the tips of my ten fingers, the work of my used hands for what –
It is, takes, still it is I will provide what you may appertain to.
Will you become a tree, of the earth, or a stone? The acacias pine cone fell on your head, purely by chance, did it not hath been done so too.
Ah yes. Lianas concatenate skeletons machinery moving along and on.
Vines adorn their plump and primitive spectacle of nothingness behind a shimmering sham –
There is not no fortuity, only details overlooked, by compressing concentration reduced abstract interpretation, which you might fall for into by plain automation.
Resin oh sweet oh resin sweet resin sweet oh sweet resin oh sweet.
Glistering sizzling bonfire.
Roasted scarabeaui.
So hath ‘Iou breathest ’n heat hither heath.
The Muses juice bittersweet truth spilled her spat in ‘heir(‘s) mouth.
Them wouldn’t want it to come apparent, when life itself was dependent on it. For the sake of goddamn nothin’.
Alas! Them couldn’t.. could naught occur bare naked washed out beauty.
They abuse purity, and so they do, lay their dirty stinkin’ hands on truth, lecherous pathetic disgusting suckers of pity condemned.
Poor lil’ leeches underserving of hate even, but pity, suffer.
I walk. Don’t know where to. Do naught know where we are comin’ from, anymore. Where am I going. The facades fade quickly by, as do the silhouettes’ apathetic faces, robbed of thy Hope. Strings of lights line thy way. Moments movement in time lapse speed. White opalescence, crystal clear thoughts are static. When the streams have dried and the grey dark clouds have wept their heavy tears revealed is the great vast sky, to hear me out cry. And the mind’s stabilized as the head of a hawk in flight. The eyes of owls wide open watch as night falls slowly soft and sets the whole wide world to sleep but me. Alone I walk the streets. The lone wolf howls at mistress moon mourning will set us free. Birds of Prey craving drink and meal on empty stomach eat. Walk down to lands where no man has ever set foot on to flay bare naked hidden concealed kill my own inner child sends chills down my spine. Bloody bath, wrath of a newborn torment. Coarse scent, horse candle. Doors get slammed shut to this odor from my ode to odium. All alone again. I sit beat stemming the oppressing onus of shattered dreams with a broken heavy heart.