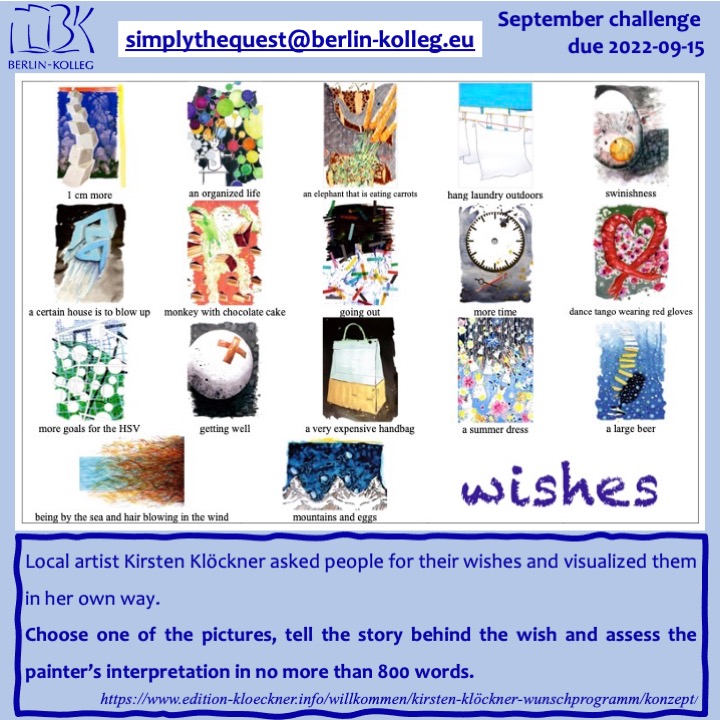 Every day is a wonderful day, if you look hard enough.”
What does she even know? She aces every course and is loved by everyone. Of course her days are always great. She doesn’t know how it is to be hated. She doesn’t know what defeat is like. She doesn’t know what’s to be a failure. A failure to not just to everyone at school, but also everyone in the family. Yeah, how would she know any of that? And with all of her optimism. Nothing can wear her down. It’s not that I’m jealous or anything. I’m just … annoyed. Probably. I mean, like … what does she even know?
Though that doesn’t matter for this day any more. And it wouldn’t for the next two following days. For a moment I just look at the entrance door of our house. It kinda became a little ritual to me. I hear the voices of my parents, so I check the windows. But they are closed.I decide to be silent to not disturb them. It probably was something important they were talking about. As they wander into the kitchen, I can see my chance to sneak to the stairs. The second step creaks loudly, so I skip it. Three, four, five, – the sixth also creaks – seven, eight, nine, – ten also creaks – eleven twelve. With silent soles I creep further into my room. My door squeaks when I open it too wide. So I just carefully squeeze my backpack through the crack.
Before I grab the keys from the small shelf next to my door, I pause. It was quiet. I hold my breath. Then the voices again. I exhale silently in relief. They are still talking.In all the days I did this, I became a real master at not making any noise. That’s why I could lift the keys with only a silent sound.
Then I climb the ladder, which I keep oiling to make sure it didn’t screech, up into the loft. At the top, I then pull the ladder up again to hide the fact that I had used it. Not that my parents really go up to the attic. Still, I never want to risk it. The attic was a loud place. Every step is accompanied by a creak. That’s why I always have to move very carefully and slowly. As long as I heard their voices, it was okay. They wouldn’t notice me as long as they were still talking loudly.
After a few carefully planned steps, I reach my little hiding place and with it my greatest treasure. It is an old screen with headphones. The perfect way to end a day.
I turn it on and the people in fancy dresses in different beautiful colours appear immediately. As soon as I put the headphones on, I feel like I am there as well. People are cheering. And music starts. A man in a suit begins to speak into the microphone. He introduces the individual dancers. A pair of one man and one woman steps onto the dance floor at a time. The men wear suits and the women wear different dresses. But no one is as beautiful as the mysterious lady in purple. She always wears a glittering purple dress with a purple mask and purple gloves that reached to her elbows.
I skip to her part. She was dancing with her partner with the music everyone dances to. There always seems to be a lot of romantic tension between the partners. The dance is called “Tango” and the mysterious lady in purple always is the best. At least for me. As soon as she starts dancing I can relax.
And then… it feels like I am there, dancing in her place. Just that my dress and gloves are red. I can feel the heat of the room and the dress on my skin, when I spin around with my partner. The world blends into bright colours. Sometimes I just see my red gloves. I feel free when I am there. The music makes me move with it. I feel like a flower blooms inside of me. It kinda tingles, when I feel like this. That feeling makes me happy and I just can’t stop grinning when I’m there.
“CHARLES! We know you’re home!”
Just a few more moments. I enjoy the music and dance more and more. The music isn’t over, so I just go on. It seems like red glitter is the only thing around me. I wish that moment would never end. I wish I would never have to take off my red dress and my red gloves. I wish I would never have to return to the real world in the end.

The handbag to solve all problems

Breesha woke up and stared at the clock on the wall. It was 9 am. She got up and looked outside. The sun was rising. Sun rays were shining through the clouds, reflecting in the windows of the houses below and creating orange glows across the town. Today was Breesha’s birthday and she was going to see her parents. Her parents would be there to show off the birthday cake in the kitchen they had both made. „Make a wish!“ her mother would always exclaim beaming. „But what do I wish for this year?“ Breesha thought to herself. She didn’t need to think for long though. Browsing through a catalogue over breakfast, Breesha found a very expensive handbag. It was identical to the one her parents had bought her the day she got her new job. It was also the one she had sold on eBay after being fired. Having this handbag would mean she no longer would have to explain to her parents that she had lost her job and had been forced to sell it. „But not all dreams come true do they?“ Breesha thought to herself.
Breesha packed her two scruffy carrier bags with clothes and food for the journey. She made sure everything was packed and headed for the door. But just as she was heading for the door, Breesha realised she hadn’t thought about everything. Her mother always loved those meringues from the bakery that she couldn’t get where she lived. Her mother would want her to get her some. But her mother also liked pain au chocolat too and what was that other thing that she likes? And how much of each delicacy would she like? Would two of each be enough? What if she had got it wrong and it wasn’t pain au chocolat she liked? Breesha remembered the last time she had gone to see
her parents and she had turned up at Mr. Jacobs‘ bakery before setting off. She remembered Mr Jacobs‘ impatient glare and the nasty patronising words he had made, when she couldn’t make up her mind after thirty minutes of standing in the shop corner agonising over her decision. Breesha went to bed to think things over and decide what to get her mum from the bakery, just so Mr. Jacobs wouldn’t get impatient again.
Three meringues and two pain au chocolat it was to be, Breesha decided two hours later. She quickly made her way to the door and picked up her two carrier bags. But then she remembered. She must go to the dentist’s before setting off and arrange a routine appointment as they are nearly always booked out. But would she be working in six months time? Should she make a late afternoon appointment just in case? But she might have to wait longer and that wouldn’t be good. On the other hand, what would happen if she got a morning appointment sooner and would then have to cancel? Would she get another appointment easily? But there again, what if she ended up working in the late afternoon and couldn’t take a late afternoon appointment? That could happen too. Overwhelmed by the decision, she went back to bed and started reading and hoping she would come up with a solution.
After a few hours she decided to ask for a late afternoon appointment. Breesha walked to the door, opened it and picked up her carrier bags, but one of the handles broke. She looked down at the scruffy bags which were virtually in tatters. It had become obvious to her that her parents would realise she had sold her expensive bag. They would realise she had lost her job at the grocery store. She knew her parents wouldn’t be mad at her for it wasn’t her fault she had lost her job. Breesha had started checking the orders over and over again because she feared accidentally ordering too much. She could still remember Mr. Smith’s ugly outburst on the day she was fired and it still upset her to this day. Despite the knowledge he was a bully and that she had tried her best, deep down she blamed herself for losing her job. She knew her wish wouldn’t come true of an expensive handbag magically appearing. But she could go and get one from a second hand shop couldn’t she?
Breesha headed hastily towards the station to catch the last train, clutching on to her two plastic bags as she went along. Looking out of the train window she smiled and looked content. She wasn’t happy with the day that had become an utter torment nor was she pleased with what she hadn’t achieved that day. She smiled because at least she had achieved something…